The vibrant, colorful, cheerful world of folk art, breathing the aroma of the steppe, reveals to us the features of the material and spiritual life of the Kazakh people.

The dwelling of a nomad, a yurt, like a small oasis, in which the spring colors of the steppe blossom. Under the felt of the yurt, in the slow rhythm of the smoothly "flowing" pattern, in pleasant combinations of contrasting or muffled tones, a surprisingly one-piece decorative composition is born, the "melody" of which is simple, broad and lyrical, like a Kazakh folk song.

The outer "walls" of the yurt are a felt cover stretched with ribbons - bau. Internal "walls", the floor of the yurt - a variety of carpets of felt, pile and lint-free carpets, mats of steppe cane - chia.

The transition from the walls to the dome is indicated by a frieze-like cloth ribbon - baskur. From the domed vault (shanrak) hanging woven bows, elegant jelbows with colorful bunches of brushes. Even the details of the frame are fastened with arches and colored stripes. And all this is done by the hands of folk craftsmen (sheber).

Deep respect is enjoyed among the people by the best weavers who reproduce on the carpet any pattern. National traditions of carpet weaving are still preserved and continue by folk craftsmen. Their products amaze us with a subtle coloristic flair, free improvisation of traditional ornamental motifs.

Sometimes they are not throws, but it is in this non-showiness that they have their own inner subtlety, great nobility and restrained significance. The variety of technical methods determined the specific texture and picturesqueness of Kazakh folk weaving; Types of weaving, like ornament, characterize the weaving peculiarities of different regions of Kazakhstan. 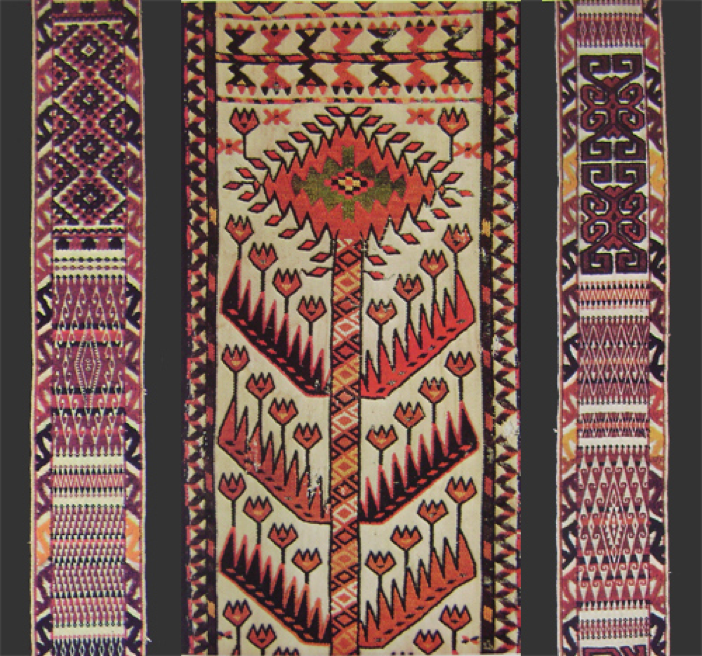 Ak baskur is a strip for decorating a yurt..

Weavers are widely spread in the "term" technique. In this technique, mainly weave bows and baskurs, which differ in their considerable density and relief texture. They are used for fixing and decorating a yurt. Especially magnificent are Kyzyl baskur, as they call it among the people for a deep red background, along which an elastic dynamic strip is arranged, a clear meandering pattern of brown color. The interlacing of threads of contrasting colors on these products creates a deep interpenetration of the pattern and the background, located at different levels. Baskurs, sewn together in rows, form colorful palaces - the term Alasha. 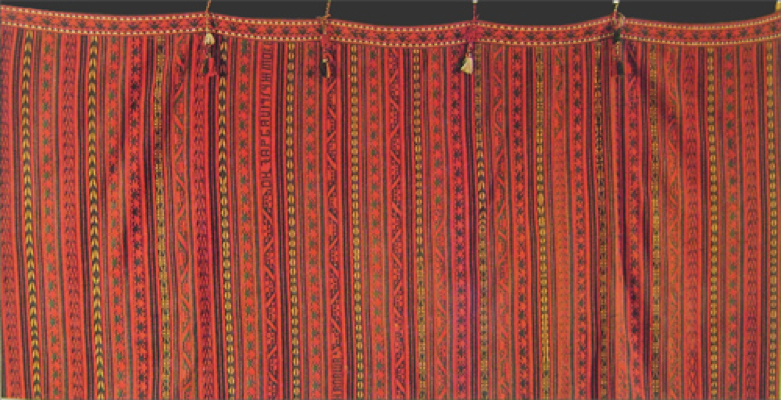 Alasha is a lint-free carpet.

Especially valuable in the people are the large elegant, lint-free carpets, which are found in the west and south of Kazakhstan - Arabi keel, woven in the technique of "kehim teru" or "Bukhara teru". The main compositional technique used by craftsmen on these carpets is the alternation of patterned and monochrome bands in various combinations. Broad single-color stripes are interspersed with narrow ornamented ones, and wide patterned stripes are separated by narrow monochrome ones.

With great imagination the weavers combine the elements of the pattern. Under their hands comes a unique improvised composition. A brown pattern with the addition of yarns of white, yellow, green colors is easy to read on a bright red, terracotta or black background. The scale of Arabic keel, the rapport composition, geometric ornament gives the carpet a peculiar severity and monumentality. 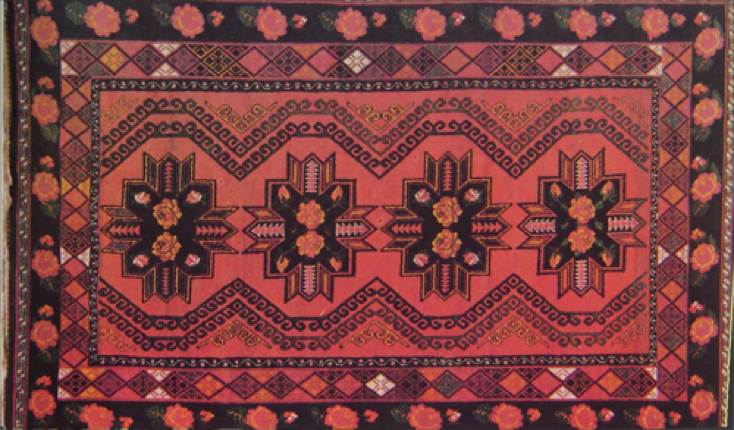 Amazing refinement is characterized by lint-free carpets, woven in the technique of "beside keste". According to the compositional system (a large central field and a curb) they look like pile carpets. Ornament is small, geometric: broken lines, triangles, dashed lines, rhombuses with horn-shaped processes. The master tacks the carpet with the help of a separate colored duck, so it appears arbitrarily embroidered on the carpet floor. (Hence the name of this carpet is five embroideries). An interesting coloristic solution. As a rule, the craftsman uses two close in tone colors for the background and ornament. The ornament is complemented by the third contrasting shade, which gives special efficiency and sophistication to the decor.

Very elegant and decorative woven strips - a bascourt, woven in mixed technique nap and without nap cloth. The craftsmen of Kzyl-Orda, Urals, Aktobe, Guryev and Mangyshlak regions mastered this technique perfectly. They used traditional geometric ornamental motifs (a comb-like comb, an orneryk-a breast ornament, etc.), as well as a tree-like pattern imitating a stem with branches out of the tree of life in the form of twigs. On a smooth white background a baskura blooms a lush, multicolored pattern. The motifs of the ornament vary richly; do not repeat in continuous motion along the closed frieze.

Since ancient times we have been famous for their pile carpets of the weaver of Southern Kazakhstan. Under the blue sky, among the mountains with snow-capped peaks, reminiscent of the white yurt, the craftsman was weaving. At first, she carefully selected the wool: she went deeper to the base, ducks, and a softer nap. Immediately on the grass a simple sta-tion was made: it is made of two poles fixed on pegs, set horizontally at a distance from each other. The manufacture of the carpet of decrees is still accompanied by observance of folk traditions. A collective work is widely used, called "keel asar".

During the whole time of working on the carpet, every day, from morning till night, the mistress is assisted by several skilled workers. The hostess prepares food for them; those who come to the "keel of the asar" bring their treats with them. At the end of work on the carpet, those involved in its production usually receive gifts. The senior masters are awarded most generously.

Particular monumentality of pile carpets is attached to large rhombic patterns with branches rhythmically repeating along the central part of the carpet, highlighted by bright, colorful contours of the curb. The border is decorated with small ornaments, more often a chain of rhombuses made up of two hooked hooks. On the central field of the carpet the foreman breaks a large expressive pattern, composed of stepped rhombuses, octagons with branches, squares, flower-like flaps. The pattern is highlighted by a bright line, clearly revealing the contours of the ornament on a terracotta or dark-cherry background, so the carpet receives a kind of warm flicker.